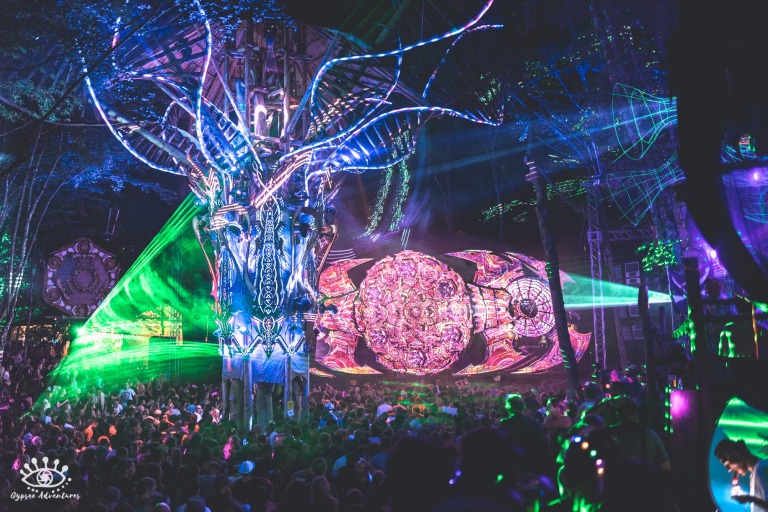 The genre has its origins in Goa trance, the latter continuing in parallel to develop among the subgenres of psychedelic trance. The genre varies in terms of mood, tempo, and style. Some trends include full-on, forest, hi-tech, dark psytrance, progressive, suomisaundi (en) and psybreaks. Although the genre is ingrained in the Goa trance scene, it is rapidly gaining popularity in Europe, Israel, North America, Australia, Japan and South America.

Many consider that there is no real difference between Goa trance and psychedelic trance, and opinions differ according to specialists. Psychedelic trance differs from other subgenres by the unique sound it presents. It is characterized by an energetic sound (usually between 140 and 160 BPM) faster than other forms of trance like techno. The genre uses strong bass without interruption, with the exception of breaks, and covered by many other rhythms from funk, New beat, techno, dance, acid house, music. eurodance and Trance. The rhythm usually changes continuously after 8 bars. Psychedelic trance tracks last an average of 6 to 10 minutes.

In general, the sounds of synthesizers generally recognizable in the trance are generally replaced in the psychedelic trance by more unexpected sounds, even surprising, impossible and immaterial. The artist can use sounds coming from the microphone which he reworks to make kicks (rhythmic beats). These sounds are often passed through a delay chamber to let a synthetic shadow hover and enhance the rhythm. The psychedelic trance will thus enhance not the melody but the synthetic rhythm pushed to the extreme of systemic repetition.

Psychedelic trance developed in the early 1990s from the Goa trance scene under the influence of artists such as Timeshard and Eat Static, both of whom were on the Planet Dog label. The first label of pure psychedelic trance is Dragonfly Records, formed by artist and trance producer Martin “Youth” Glover (a former bassist for Killing Joke) in Brixton, London. He did this by leveraging the organization and studio of his already existing label, Butterfly Records. It quickly became the center of London’s psychedelic trance scene. Raja Ram and Graham Wood first produced there under the name The Infinity Project. Simon Posford, who worked as a sound engineer at Butterfly, later released his legendary album, Twisted on Dragonfly, under the name Hallucinogen. The sixty-year-old Raja Ram and the young Simon Posford then decided to work together in 1996, from their association the Shpongle group was born. The first track of this group is published on the compilation Infinite Excursions of the label TIP Records. As for the first compilation on Dragonfly, this is a collection of trance snippets and quickly follows with another compilation titled Project II Trance in August 1993. It includes the work of well-known artists like the French project Total Eclipse and MandraGora. In 1994, the singles of Man With No Name, Prana, Ayahuasca, Slinky Wizard and Doof appeared. The compilation by Order Odonata was released the same year.

At this point, the scene is changing rapidly and many labels are created. Raja Ram and Graham Wood found their own label called TIP Records (now called TIP World). Tsuyoshi Suzuki works with John Perloff to create the Matsuri Productions label. Flying Rhino Records is established by James Monro, Dominic Lamb and George Barker (Slinky Wizard), who hires Sally Welch as director. Simon Berry founded Platipus Records, which among other things released Technossomy’s first vinyl. It also authorizes Robert Miles’ famous Children. Simon’s project, Union Jack released the trance album There Will Be No Armageddon in 1996, which featured a few well-known tracks like Red Herring, Cactus and Two Full Moons and a Trout.

During this same period, a new label appeared in the United Kingdom. Some consider Blue Room Released to be one of the most important and unusual labels in the psychedelic trance genre. It is run by Simon Ghahary and receives strong financial support from a UK speaker company. Reportedly [Who?], Ghahary has the freedom to spend as he sees fit, regardless of sales numbers. This allows Blue Room to move away from “classic” Goa trance in new directions, more experimental. Some of the artists sign with the Blue Room Released label who distribute their work. A first compilation called Outside the Reactor was released in April 1995; it features artists such as Total Eclipse, Har-El Prussky, and Voodoo People. Three of the most famous projects – Juno Reactor, Total Eclipse and The Infinity Project are also making their albums this year. Very quickly, the German project X-Dream began working on Blue Room, producing the single The Frog and the very influential album Radio. At its peak, the label released works such as Violent Relaxation by Total Eclipse, Bible of Dreams by Juno Reactor, Saafi Brothers – Mystic Cigarettes and Dragon Tales by Koxbox.

Despite being the center of psychedelic trance production in the mid-1990s, England featured a very limited party scene. This was mainly due to the Criminal Justice Bill and the very tight opening hours of nightclubs. On the other side of the Channel, in Germany, the legislation, much more liberal, contributes, with the recent reunification, to the development of the local psychedelic trance scene. German label Spirit Zone Records opened in 1994, and ended up signing with many foreign artists such as The Infinity Project (UK), K.U.R.O. (Japan), Etnica (Italy), and Har-El Prussky (Israel). It was also the home label of many German artists such as Electric Universe, Star Sounds Orchestra and S.U.N. Project. France has also become a land of asylum [non-neutral] for hundreds of Goa trance raves, with organizations such as TBE organizing a memorable Juno Reactor concert in Paris on December 31, 1992 just before their joint successes with Total Eclipse, but also with Tekno Tanz which would become Gaia Concept in 1991 and the emergence of now famous projects such as Talamasca and Transwave.

Around 1997, the original Goa trance scene was going through a rough patch, especially in the UK. Sales plummet and many big labels like Flying Rhino go bankrupt, while others have to remake and reappear under a new name, like TIP World is doing. The death of Goa trance is “officially” declared by Tsuyoshi Suzuki on his album Let it RIP, where the booklet read “RIP: Mother Theresa, Princess Diana, William Burroughs, Goa trance. »(Rest in Peace). The new sound of what psychedelic trance has become, appears at this moment. It includes elements of minimalist and progressive trance, house, and techno, while focusing less on the original melodies of the Goa sound. Germany became the center of this movement in 1997 and 1998. Many Swedish artists also appear playing a more progressive sound. Tomasz Balicki (Atmos) wins success with his track Klein Aber Doctor, the most successful release of the Flying Rhino label, which was being restructured. Even the Dragonfly label headed for this new progressive sound, and psychedelic trance was once again becoming popular. The early releases of Atmos, Noma, S-Range and Son Kite only cement that and make Sweden a major producer of psychedelic trance. 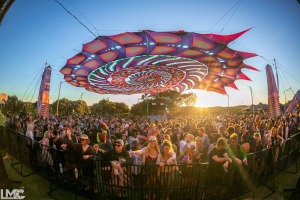 In recent years, sales of psychedelic trance have plummeted. The drop is -2.8% in 2001, and -8.8% in 2002. A typical album usually sells around 2,000 copies, over 5,000 is a hit! There are only a handful of artists who sell over 20,000 copies, including Hallucinogen, Infected Mushroom, Transwave, and Astral Projection. The Hallucinogen Twisted album has the most commercial success to date, selling around 85,000 copies.

The reasons for this decline include overproduction, the lack of media coverage of this musical genre, and the low quality of certain music. In fact, the market hasn’t changed much, but the number of new labels and artists has grown exponentially. The advent of Creative Commons licenses in 2002 gives psychedelic trance an ease of access for fans that it did not have before: many CC-licensed albums from netlabels or independent artists are in existence. as and when made available to Internet users in high quality on Internet platforms.

The club and dance scenes used psychedelic trance around the world in performances, alongside trance-goa, ambient, progressive trance, and minimalist trance. The mix of goa and psychedelic trance is the popular form of Trance represented to many enthusiasts. Psychedelic trance is often performed at outdoor festivals. These festivals are sometimes conducive to the consumption of drugs such as LSD, hallucinogenic mushrooms, mdma or ketamine, which may explain the relentlessness of the public authorities which strongly regulate
when they don’t delete them. Festivals are often held over several days with music playing all night and the following day.

In the state of Goa, goa and psy trance parties can take place at unusual locations such as on a beach, in a desert or deep in a forest, although it is not uncommon for them to be held in conventional places like nightclubs. The scene may only be a provisional montage. They have to pay the local police, the baksheesh. Once the baksheesh have been paid, they are free to take out their charas (a kind of hashish) and fill their chillums (conical pipes) without the fear of being arrested.

The holidays around the New Year tend to be the most chaotic. Travelers, beggars and sadhus from all parts of India come to join the event. 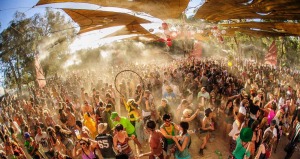 Goa and psy trance parties also have a certain visual appeal, the use of fluorescent colors is common on clothing and on decorations such as tapestries. The graphics on these decorations are usually associated with themes such as aliens, Hindu images, other religions (especially Eastern), mushrooms (and other psychedelic images), shamanism and technology. Places in front of DJ stands displaying religious objects are also common decorations. Several Shpongle titles feature these universes.
Psychedelic trance is often produced with a collaboration between two or more artists, this collaboration is called a “project”. The fact that an artist can be part of ten or more projects, often simultaneously, differs slightly from other genres of music. Each different combination of artists almost always has a unique name. X-Dream (Jan Muller and Marcus Maichel) and Planet B.E.N. (Ben Wierzoch) are well known projects from Germany. The collaboration between Jan and Ben is called Organic Noise and the collaboration between Marcus and Ben is called Fools and Tools. This partly explains the large number of psychedelic trance projects.

As shown above, the names of projects made by the same artists can often be independent, although this is not always the case. For example, many names of projects involving Infected Mushroom are often preceded by the term “Infected”.

Very few psytrance artists release albums under their own name (Tim Schuldt is an exception). The fact that the same artist, or group of artists, can use different names to present different variations of their music makes things even more confusing. A good example is Michael Andersen from Sweden who uses the name 12 Moons for his dance project, Healer for his ambient project, and Neser DNA for his dark industrial trance project. The name of the project is sometimes chosen to describe the theme of the music produced. It’s no surprise that the releases of Crop Circles and Pleiadians focus on space travel. As does Astral Projection sample, from Dune, the explanation of the spice used for space travel in its title Dancing Galaxy. [Irrelevant]

Among others, countries with no basic connection to trance (or other relatively quiet styles) such as Israel, with the DiscJockey Vini Vici; or the Netherlands, a country producing hardcore techno, with DJ Armin van Buuren.

Some independent record companies of goa and psytrance trance music, popular on the international scene:

For a short time in the mid-1990s, trance-goa had significant commercial success thanks to the support of DJs like Paul Oakenfold. Hardly a few artists have managed to be goa and psy trance “stars”. The two most notable are Man With No Name and Juno Reactor who had their music featured in a lot of Hollywood movies like Mortal Kombat, The Matrix, and even Once Upon a Time in Mexico … Desperado 2.

In fact, trance-goa remains a form of underground music and apart from the most popular artists (Hallucinogen, Juno Reactor…), trance-goa albums are generally not sold in major record stores. 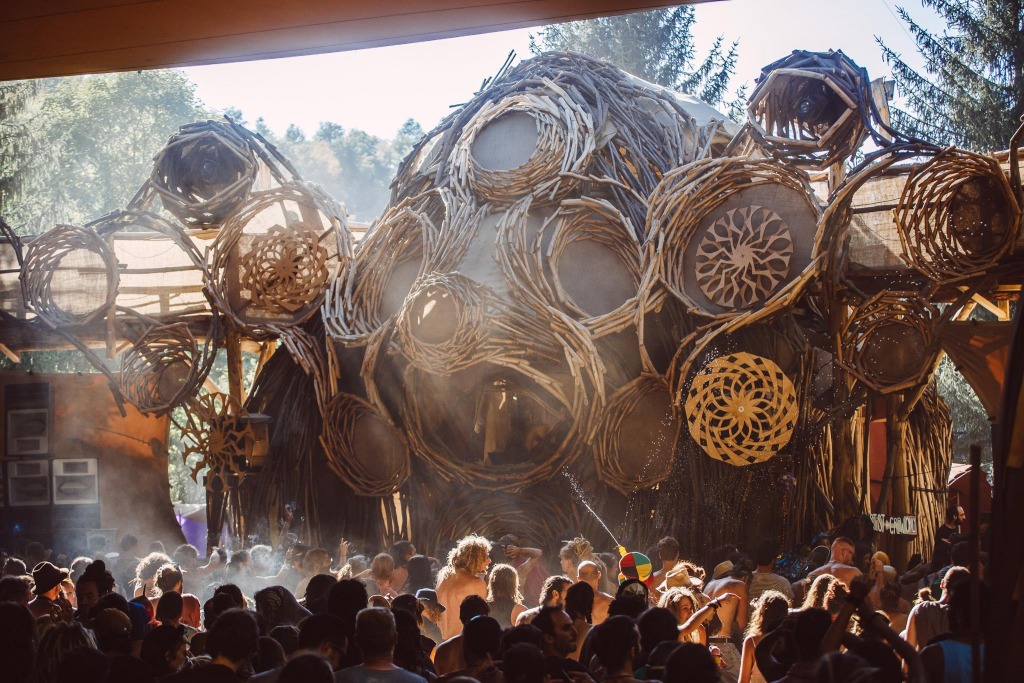